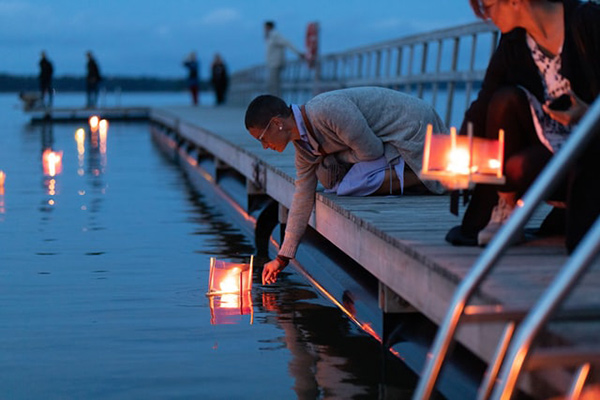 After a Campus Suicide: A Postvention Guide for Student-Led Responses, 2017 (opens new window)
From Active Minds comes this guide that was created to help students respond to a death by suicide of a fellow student. The guide is available free of charge after completing a brief form at the bottom of the page.

Responding to Suicide Clusters on College Campuses, 2015 (SAMHSA Webinar/Parts 1 & 2/opens new window)
Learn from experts in suicide prevention and college mental health about the current understanding of suicide clusters in general and on college campuses. Presenters will discuss the epidemiology and demographics of suicide clusters; what is known about the settings in which clusters are more likely to occur, and how to effectively communicate on and off campus and in the media to diminish the risk of contagion and clusters occurring. Experts from college campuses will also share their experiences on responding to multiple suicides.

POSTVENTION: A Guide for Response to Suicide on College Campuses, 2014 (PDF/.98 Megabytes)
This resource is intended for use by colleges and universities that are affected by and/or want to be prepared for campus crises and campus deaths.

Responding To Suicide: Resources on Campus Based Suicide Postvention, 2010 (PDF/.244 Megabytes)
A list of additional post suicide resources and research.

After A Suicide: Recommendations for Religious Services & Other Public Memorial Observances, 2004 (PDF/.935 Megabytes)
Recommendations created to aid members of the clergy and other community and faith leaders as they care for those who have survived the loss of a loved one due to suicide and to assist them in helping to plan a memorial observance. This document provides background information, suggests ways to care for and support survivors, offers recommendations for planning memorial services, and lists additional resources.

Aftermath of Tragic Events: The Development and Use of Community Support Meetings on a University Campus (PDF/.202 Megabytes)

Clinician Survivor Task Force (opens new window)
Created in 1997 by the American Association of Suicidology, the Clinician Survivor Task Force was formed in order to provide support, guidance, and resources to clinicians who have lost a patient to suicide. In recent years, they have expanded to support clinicians who have lost family members to suicide as well.

Uniting for Suicide Postvention (opens new window)
Provided by the U.S. Department of Veterans Affairs, this site contains postvention support and resources for anyone who has lost a loved one to suicide.